A downloadable game for Windows

This is a playable demo only. Dungeon Drafters has been successfully funded by Kickstarter and it is now under development!

Dungeon Drafters is a world where magic is cards and cards are magic. Play as a young adventurer, eager to explore ancient dungeons and find long-forgotten cards to build the legendary spell deck that could defeat the one wielding the forbidden cards the entire world fears!

In Dungeon Drafters, your cards are your arsenal. Split the ground open with earthquakes, cast white-hot fireballs, and call down lightning to eliminate your foes.

Use your cards in conjunction to execute incredible combos that devastate the battlefield, destroying all that stands in your way. As long as you have the cards, the power is in your hands.

We truly hope you enjoy Dungeon Drafters demo! JOIN US!

Enjoyed this game alot, pretty good for an alpha version

I did a quick play of the game. It is great I love it. For a demo, it's really fun and enjoyable and I can't wait to see its release.

It was a lot of fun, tho - accidentally went on the stairs down, and didn't get a prompt to continue and thus missed out on chests. For future release, that would be most helpful. I can't wait!

The demo was super fun, can't wait for full release

This game looks so good, i would play it if there was a mac download.

When this game will show up on Steam ? I keep forgetting the name of the game, please go to Steam so i can Wishlist there.

I love this game so much, but i has a problem. When i was at 12 room, the game got bugged. I did press all the keys and then the pilars fall down (like the room has finished), but the game keep stoped.

absolutely love this game, I can't wait for the complete version, I hope it will be out soon!

Simply awesome, the only bad point is that it has an end.

The artstyle works extremely well, the music however gets repetetive.

The gameplay is fun, although it relies a bit much on RNG, and I'd personally prefer more deep/synergy based system.

There's a lot of minor inconveniences- bug when leaving the floor, where it let me run through the elevator before it rubbered me back, combat feeling frustrating when there are multiple enemies just because I have to wait for my own turn, while 6 enemies have fun running around doing frick all (speed up enemy turn?), the ordinary attack animation being way too slow, but those are things that can be all fixed.

Overall, enjoyed the demo immensely. Good luck with the game. <3

A game with a TON of visual appeal and charm, however pausing the game crashed my system.

So how do I play this? Im on 64 bits, and when I downloaded it it says its file type is a rar and it wont open it for me.

All you need is the heart of the cards to beat this demo.

positives: I really loved this game, beautiful graphics and soundtrack too.

negative points: some bugs that can harm you

Lovely demo, but those summoners definitely need a nerf. I just spent way way too long on a room that spawned four of them. If this were a full game and I had died there it would have killed my enthusiasm

They were really the stinkers for me. I literally walked across the room for a summoner and it healed itself and a bomb summoned two more bombs and teleported itself from danger. I finished the puzzle room and after that, I said myself if I see one more I will close the game and I did.

I don't want to exaggerate but those types of enemies(the summoner and sparky) and the sluggishness of the game really broke the charm for me.

Otherwise, I like the telelocation, thermal punch, mirror orb, fireball and dash cards were pretty fun. They made the game more diverse and more fluid.

This was an absolute blast, and I really loved it! I normally don't play card based games but figuring out the strategies on this was really fun! I beat the demo on the third try, and whilst the game didn't get stale, it sure felt slow. It may be better to add a permanent fast forward button as your pinky can hurt after a while. The summoning guys were kind of annoying in large numbers, but it was nice how they can only summon one beetle at a time. I would love to see the game's pace be a bit faster, as this is quite a nice strategy game

Overall, has a lot of potential and was really fun, 5/5

Gave the demo a run through, gotta say I'm a big fan! The art is especially nice, I love her walk animation a lot.

Just a few notes on my end:

I found I lost track of my health bar. It's there, at the bottom left, but unlike enemies it didn't pop up over my head when I took damage. I found myself in critical condition after moshing with a bunch of enemies near a lure and didn't realize I was taking damage. I saw later 1v1 that a tiny damage number bounces off me, but without the hp bar showing up as well it really doesn't register as damage, ya know? Having an option to show a hp bar near my character would be really appreciated.

My apologies I forget the name, the teleporting lightning bolt attack that repeats if you kill an enemy. I finished off everyone on the field using that but the overlay remained and I couldn't continue until I right-clicked the effect away. Not major but I feel it's one of those things that could potentially trip someone up.

Congratulations on your kickstarter succeeding! I'll definitely be keeping an eye out for this game in the future!

Fun game. Some cards give wrong descriptions of what they do with the right images. idk if this is intentional of a bug. I guess it rewards knowing the cards!

i need it web plz

I generally don't like card games. However, this was an absolute blast even with the limited cards and enemies in this demo. I love all the mechanics, art, sound design, and even the music so far. One thing that really stuck out to me is how the music transitions between walking around normally and battling. If I would have seen this sooner, I would have backed you on Kickstarter for sure. I will be following this game very closely and will definitely be picking it up on PC and probably Switch too!

I love this game, unfortunately it's a very short demo, I would like to see more in the future <3

the game crashed once.. ,,,, also this is rlly good game looking forward to it , keep up the good work (idk am emberesed xd)

Quite an upgrade compared to the prototype! I enjoyed playing through this demo very much.

Managed to make the mistake of not recording my playthrough though, again.

super nice, dropped a slime into a hole and blew up an army at once, exciting possibility space

Although I preferred the original format, this game is still really fun to play and I enjoyed every single second of it. Props to you guys!

This should be on steam.

Worth at least a few bucks 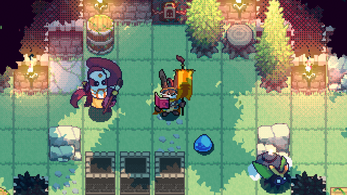 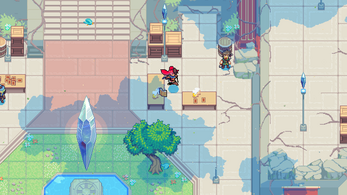 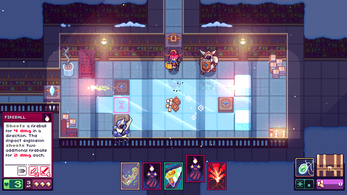 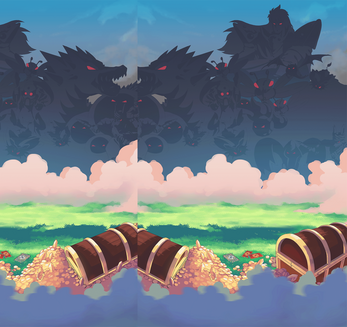